For some years now, the Colegio Apóstol Santiago of Vigo (Spain) has had a Mahara ePortfolio available to students and teachers of the secondary school. Our Mahara is linked to Moodle for single sign-on. I started to use Mahara to introduce my students (and myself) to the concept of ePortfolios. The goal was to create an ePortfolio for science to present at the end of the course. I already had an idea about what I wanted and expected from my students. But the first problem I had to face was not a pedagogical but an ICT issue. I soon realized that I had to teach my students to use Mahara. Although the usability of Mahara is getting better with each new release we must admit that it’s still difficult for those who want to log into their account and start creating a simple text page from scratch. If you also ask for some graphical evidences of learning such as pictures, charts or diagrams you’ll soon realize that implementing a digital portfolio with young students is not as easy as it looks.

As an STEM (Science, Technology, Engineering and Mathematics) teacher, I don’t have much time that I can allocate to help my students to get the most out of Mahara. Fortunately I feel confident in using and teaching about ICT so all my grade 9 students receive a couple of training sessions in using Mahara. Learning to create a page, filling in a title, description, tags, set up the content and share with others is easy. Also adding text or videos from YouTube is easy, but some problems arise when they have to work with pictures.

Digital natives (Prensky, 2001) take pictures and move them through social networks everyday but they’re not so good when they have to edit or embed them into a webpage. They think that all can be accomplished with a “copy and paste” or a “drag and drop”. Most of them don’t care about the size and resolution of their own pictures. Pictures are a key element in digital portfolios. Beyond the adage “a picture is worth a thousand words”, they actually are the easiest way nowadays of digitizing evidence. With a cheap cell phone that has a camera everyone can take digital evidence of learning or achievements. But sometimes the evidence is just a small spot within the picture and not the whole picture. So learning how to crop an image, add an arrow, or insert extra text to remark some detail are useful skills to start using ePortfolios.

See below some examples of different evidences submitted for a scientific report and notice how some students remark important details (evidences 2, 3 and 4) but others don’t (evidence 1). 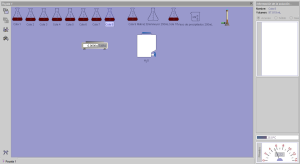 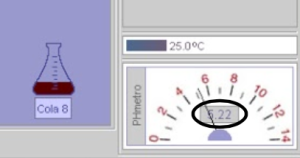 Evidence 3: Edited picture where the student called the attention to pH value of the cola sample number 8 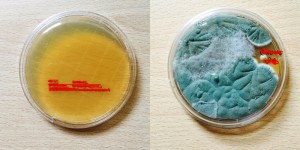 Evidence 4: A before-after digital evidence where a student had to merge two pictures

Don’t assume that all your students already have these skills because they’re digital natives. That’s why I titled this article as don’t forget the e of ePortfolios. Educational technologies such as ePortfolios have at least two dimensions: pedagogical and technological (ICT). Sometimes educational technologist evangelists or software vendors tend to present new tools with a single focus on pedagogical issues underestimating the risks or issues of the technological side. Underestimating the challenges of that digital side can ruin a successful adoption.

Some people insist on that ePortfolios are not suitable for primary and secondary students but that’s not true. There are tons of successful experiences in schools. Give it a try to adopt ePortfolios in your subjects. No matter if your goal is to assess students or just using them as a learning activity. But foremost, be aware of the “e” dimension of this tool at the same time.